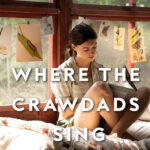 Caution: Entering Spoiler Territory! Travel down to the Carolina marshes with Creative Genius Bryan Caron and Professor Avatar Tom Grimes for a review of the adaptation of the best-selling romantic murder-mystery, Where the Crawdads Sing. After, stick around for discussions on new episodes of Animal Kingdom, The Orville: New Horizons, and Ms. Marvel, as well as all of the Emmy nominations fit for spoilers. So what say you? Did Where the Crawdads Sing have enough intrigue to keep you guessing, or did it favor it’s Jane Austin a little too heavily?