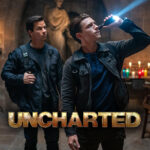 Caution: Entering Spoiler Territory! Fall into a wild adventure with Creative Genius Bryan Caron and Professor Avatar Tom Grimes as they discuss the Tom Holland/Mark Wahlberg-led video-game adaptation, Uncharted. After, stick around for thoughts on the newest episode of Resident Alien, season 4 of Animal Kingdom, and a ton of television news, including renewal announcements and release dates for your favorite shows. So what say you? Did Uncharted live up to it’s treasure-hunting predecessors, or did it rely a little too heavily on Fast and Furious action ridiculousness?