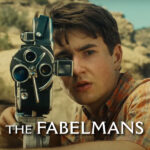 Caution: Entering Spoiler Territory! Look through the lens of time with Creative Genius Bryan Caron and Professor Avatar Tom Grimes take a look at The Fabelmans, a new coming-of-age drama loosely based on director Steven Spielberg’s life growing up in Arizona. After, join the boys for quick discussions on the film, Bones and All, the season finale of Andor, the new season of Yellowstone, and the new series Wednesday. So what say you? Was The Fabelmans an awe-inspiring look into film, life, and growing up, or did it fail to capture your imagination? Also, what is your favorite Spielberg film?