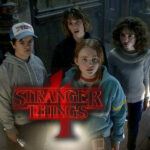 Caution: Entering Spoiler Territory! Head back into the upside-down with Creative Genius Bryan Caron  and Professor Avatar Tom Grimes as they discuss the first seven (long) season 4 episodes of Netflix’s smash hit, Stranger Things. After, join them for discussions of the first three episodes of Disney+’s Obi-Wan Kenobi, some premiere and renewal news, and the third season premiere of The Orville, also titled New Horizons. So what say you? Was this first batch of episodes of Stranger Things: Season 4 worth the long two year wait, or did it meander with too much fluff?