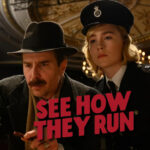 Caution: Entering Spoiler Territory! No we mean it. Spoilers abound as Creative Genius Bryan Caron and Professor Avatar Tom Grimes reveal the killer of the new murder mystery, See How They Run. Afterward, stick around for discussions on the entirety of Cobra Kai season 5, new episodes of Resident Alien, She-Hulk: Attorney at Law, and Kevin Can F Himself, a little preview of the upcoming season, and our thoughts on this year’s Emmy winners. So what say you? Did you bust a gut at the silly British antics in See How They Run, or did the film spoil the movie for you in the first act?