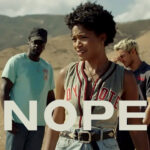 Caution: Entering Spoiler Territory! Join Creative Genius Bryan Caron and Professor Avatar Tom Grimes fight aliens (or don’t) as they discuss Jordan Peele’s new film, Nope. Stick around for some renewal news and discussions on new episodes of Animal Kingdom, The Orville: New Horizons, and Only Murders In the Building. So what say you? Was Nope another great entry into Jordan Peele’s film repertoire or was the entire thing a great big no?