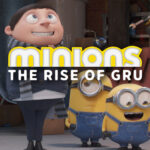 Caution: Entering Spoiler Territory! Hide your bananas as Creative Genius Bryan Caron and Professor Avatar Tom Grimes discuss the newest entry in the Despicable Me franchise, Minions: The Rise of Gru. The boys also discuss new episodes of Animal Kingdom and Man vs. Bee, the most recent cancellations and renewals, updated information on the upcoming Quantum Leap sequel series, and Bryan’s list of the top 5 movies of the year thus far. So what say you? Was Minions: The Rise of Gru a fitting (second) origin story or have they officially run the Minions well dry?