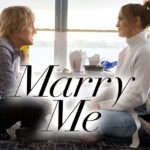 Caution: Entering Spoiler Territory! Celebrate Valentine’s Day with Creative Genius Bryan Caron and Professor Avatar Tom Grimes as we discuss the new Jennifer Lopez/Owen Wilson romantic comedy, Marry Me. Then, stick around as the boys discuss new episodes of The Book of Grogu and Resident Alien, the new Jurassic World Dominion trailer, the announcement of an Early Edition reboot pilot, and dive into all of the Oscar nominations and their predictions for what will and should win at this year’s Academy Awards. so what say you? Did Marry Me find love among the best romantic comedies, or was the chemistry so flat, it melted any semblance of realty?