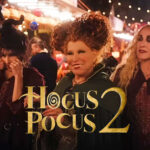 Caution: Entering Spoiler Territory! The witches are back to put another spell on you as Creative Genius Bryan Caron and Professor Avatar Tom Grimes review Hocus Pocus 2, Disney’s sequel to the 1993 halloween comedy, Hocus Pocus. After, enjoy discussions on the season finale of Resident Alien, the season premieres of Young Sheldon and Ghosts, and new episodes of Andor, She-Hulk: Attorneys at Law, Lord of the Rings: The Rings of Power, Quantum Leap, Big Sky, and Kevin Can F Himself. So what say you? Did the black flame candle reinvigorate the Sanderson sisters to their previous glory, or did the absence of the original kids in Hocus Pocus 2 subdue the original magic?