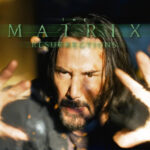 Caution: Entering Spoiler Territory! Travel back into the matrix with Creative Genius Bryan Caron and Professor Avatar Tom Grimes as they discuss The Matrix Resurrections, the fourth installment in the groundbreaking franchise. Later, the boys discuss the season finale of Hawkeye, discuss a bit about the new season of Dexter and the upcoming seasons of The Book of Boba Fett and The Mandalorian, and go through the upcoming 2022 Marvel releases in both theaters and streaming. So what say you? Was The Matrix Resurrections a return to glory for the Matrix franchise, or did it do a little too much copy and pasting to make it worthwhile?