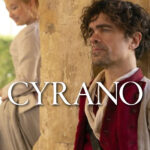 Caution: Entering spoiler territory! Fall in love with tragedy as Creative Genius Bryan Caron and Professor Avatar Tom Grimes take a look at the newest iteration of Cyrano, starring Peter Dinklage as the titular character. After, stick around for thoughts on new episodes of Resident Alien and The Walking Dead, as well as the upcoming season of Picard, who should host game shows, and all of this week’s biggest news. So what say you? Did Cyrano speak to your heart, or was Peter Dinklage too big for the overall production?