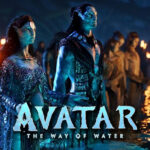 Caution: Entering Spoiler Territory! Creative Genius Bryan Caron and Professor Avatar Tom Grimes celebrate their 100th episode with a trip back to Pandora as they discuss Avatar: The Way of Water, James Cameron’s first scheduled follow-up to the 2009 blockbuster. Stick around after for discussions on the Golden Globe nominations, new episodes of Yellowstone and Ghosts, and a tribute to Stephen “Twitch” Boss, who committed suicide this past week. So what say you? Did Avatar: The Way of Water ascend high above its predecessor or was the film just far tooooooooo long for its own good?